TOUCHED BY LYME: Meredith raises $1500+ for Lyme research in one week…and is still going strong 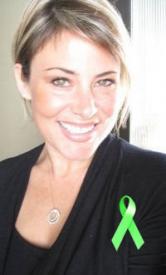 Just last week, southern California Lyme patient Meredith Hiney heard about the upcoming 2010 CALDA Lymewalks, and “instantly knew” that raising money for Lyme disease research was something she wanted to do. Following the easy directions on the CALDA website, she set up her own fundraising page, emailed the link to family and friends, and in less than a week raised more than $1500 for Lyme research. Who is Meredith Hiney, and why is she fundraising like the energizer bunny?

Back in 2007, Meredith was a happy, active stay-at-home mom of two young daughters in Palm Springs. She and her husband were considering relocating the family to Washington state, and had flown there to look at houses. Suddenly, sitting in a restaurant in Spokane, she was overcome with “very weird” symptoms—which she describes as “almost like being very drunk.” Alarmed, she hurried to an emergency room, where doctors pronounced she was suffering from “anxiety.” They gave her medication that seemed to calm her symptoms…for the moment.

But the problematic symptoms returned. Lots of dizziness, difficulty thinking, and “a profound feeling that something was terribly, terribly wrong.” Her primary care doctor found nothing amiss and suggested Prozac for depression.  She then started on a medical merry-go-round of visiting countless specialists and having countless diagnostic tests, all pronounced “normal.” At one point she was told she had MAV—migraine-associated vertigo—but that didn’t answer all the extra symptoms she had developed, including debilitating pain in knees, back and neck.

More than two years later, someone thought to test her for Lyme disease, and results were “suspicious.” That started her on another long quest that ultimately resulted in a diagnosis of Lyme and babesia—a diagnosis reached only about six months ago. She’s struggling through treatment for that now, crediting her strong Christian faith and the love of her family for helping her make it through each day.

Meredith has wanted for sometime to advocate for the needs of Lyme patients, but wasn’t sure how to get started. Then she learned about the CALDA Lymewalks, and said something just clicked for her. She is still going strong with her fundraising efforts, and has also assembled a team of at least six other family members to walk with her in San Diego on October 16.

How about you? Will you help raise money for Lyme research too? Walks are planned for Los Angeles, San Diego, Sacramento, San Francisco and Ukiah, California. But you can be a “virtual walker” from anywhere. You can create your own fundraising page, or donate to somebody else’s. Click here for more information about how it all works.

Let’s do this together.