TOUCHED BY LYME: Fill a theater, change the world…. 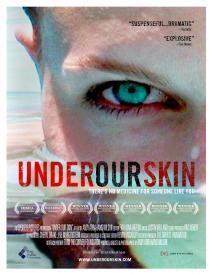 The long-awaited theatrical release of the Lyme documentary Under Our Skin is almost here. The film opens at New York’s IFC Center on June 19 and at Beverly Hill’s Laemmle Music Hall Theater on June 26.

Although other cities are on the list, these first two are of primary importance. How the film does in New York and Los Angeles will dictate how widely it will be picked up nationwide. Big crowds on the opening weekends in these two cities will prompt more and more theaters across the country to book the film.

And that will be very good for the Lyme community. In the year since it premiered at the Tribeca Film Festival, Under Our Skin has been the catalyst for scores of TV news stories and radio talk shows, along with probably hundreds of newspaper articles. It was also part of a Congressional briefing on Lyme disease in Washington, DC.

This movie is simply the single most effective tool the Lyme community has for catching public attention and communicating our message.

So far, this has been done by showing it at film festivals and community screenings. How much more can we accomplish if we parlay the New York and Los Angeles events into bookings at major theaters nationwide? It will propel the public conversation about Lyme disease to a whole new level.

So, what can an individual person do? Plenty. Here’s how:

Obviously, if you live in the vicinity of New York or Los Angeles, first and foremost, clear your calendar. Plan right now to get your body (and your family’s bodies, and those of all of your friends and relatives) down to the movie theater. Try your best to make it on opening weekend. That’s when it will pack the biggest punch.

But what if, like me, you don’t live in New York or Los Angeles? I’m betting you KNOW people who do. Friends, relatives, former co-workers, long-lost schoolmates you just found on Facebook….send them a version of the following email, or make up one of your own:

You may know that in the past few years, our family has been turned upside down by Lyme disease. It’s a wretched condition that I wouldn’t wish on anyone. But the physical misery it causes is made ten times worse by the fact that the medical community, the insurance companies and even government health officials are trying to sweep this illness under the rug. That makes it harder for our family and others like us to get the medical care we need to get well.

In the years we have been coping with Lyme, many of you have generously asked if there was anything you could do to help us. Right now, the answer is yes.

On June (19/26), a very important movie called Under Our Skin will open in (New York/Los Angeles.) The film shines a light on significant problems in our health care system—ones which will affect your family, too, if any of you are unlucky enough to be among the 200,000 Americans who will catch Lyme disease this year.

I would consider it a personal favor to me if you would go see this movie in (New York/Los Angeles), preferably on opening weekend. And take people with you! Raising public awareness of Lyme disease and all its complexities is a vital first step towards solving this national crisis.

I promise it won’t be a boring evening. As Michael Moore so ably proved with Sicko, a provocative documentary about health care will keep you on the edge of your seat! Under Our Skin is riveting, gut-wrenching and powerful. You’ll be thinking about it and talking about it for weeks to come.

More are pending. Check back with the Under Our Skin website for regular updates.

All of these screenings merit our support. But the opportunities presented by New York and Los Angeles deserve special attention. Let’s marshal our resources and fill up those theaters. Start sending those emails today.