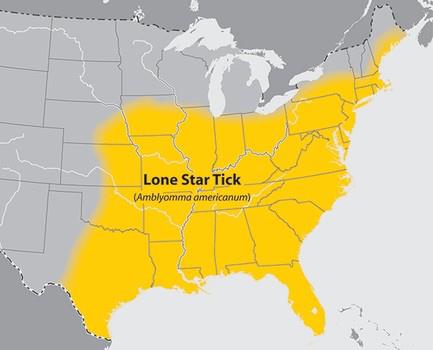 Liz Schmitz, of the Georgia Lyme Disease Association, discusses important new research indicating that yes, folks, there is indeed Lyme disease in the southern US.

For the first time ever, University of North Florida’s Dr. Kerry Clark and colleagues reported finding two species of Lyme disease bacteria previously unknown to infect humans, Borrelia americana and Borrelia andersonii, in symptomatic patients living in the southeastern USA. Importantly, the commonly found lone star tick, formerly believed by many to be incapable of transmitting Lyme disease, was implicated in some of these cases.

The research, published in the May issue of The International Journal of Medical Sciences, is extremely significant for several reasons.  First, only one Lyme bacterial species, Borrelia burgdorferi sensu stricto (Bbss), was previously recognized to cause disease in North America.  Current testing methods and interpretation criteria, designed to detect just one species,  may explain many of the complaints involving the unreliability of Lyme disease tests in the USA.

In addition, the belief  that only black-legged “deer ticks” can transmit Lyme disease has been widely publicized for decades.  Lyme disease risk has been calculated largely based upon the prevalence and infection rate of these deer ticks, Ixodes scapularis. In fact, Yale University recently released a new Lyme disease risk map funded by a $2.9 million CDC grant which was highly contested by many. (They only tested a total of nine black-legged ticks from a few southern states.)  Yale’s map, based solely on deer ticks, shows little risk to people living outside the northeastern USA. Clark’s findings, together with past studies implicating lone star ticks associated with Lyme disease (Masters, Rawlings, Felz, Feir, etc.), strongly suggest otherwise.

Dr. Clark and his team identified lone star ticks, Amblyomma americanum, removed from humans who tested positive for Lyme bacteria, including the species of Borrelia burgdorferi , Bbss, already known to cause the disease in North America. Some of the ticks removed from the patients tested positive, too.

Lone star ticks are the most commonly found species biting humans in the southeastern United States. These aggressive ticks are found almost halfway across the nation – from the deep South and as far north as Canada. This groundbreaking research may clarify why so many humans living outside of the northeastern USA claim they have contracted Lyme disease** regardless of the presence of infected black-legged ticks.

The new findings significantly expand the geographic area where Lyme disease should be considered by medical providers and citizens alike. If only one percent of these ticks are able to transmit Lyme disease, it poses a tremendous threat to public health because lone star ticks are known to bite humans so frequently.

Georgia Lyme Disease Association is proud to have provided both technical assistance and funding in support Dr. Clark’s important research.

**Article Note: For decades, public health officials and Lyme disease groups and organizations have heard from thousands of patients living outside known “endemic” areas who claim they and/or their family members contracted Lyme disease with no travel history. Georgia was the 4th highest state in the nation in number of CDC-reported Lyme cases in 1989 with 715 cases on record.  Now, most cases of southern Lyme disease are unreportable due to the different surveillance guidelines used regionally.  Many cases are also dismissed as “false positives.”
.
.

Liz Schmitz is founder and president of the Georgia Lyme Disease Association. She can be reached via the group’s website.