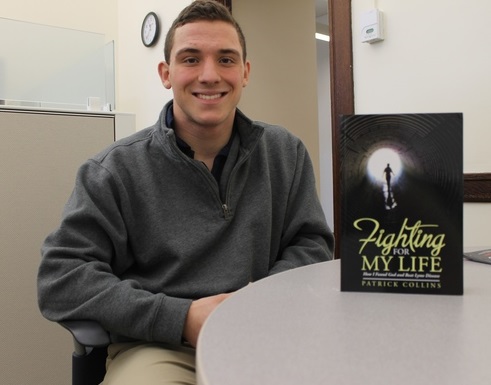 If you met Patrick Collins as a young teen, you’d be hard-pressed to imagine him jogging around his neighborhood, never mind one day running track at Bridgewater State University.

During much of his time in middle school, Patrick suffered fatigue, sinus congestion, aches, and other ailments that left him struggling to get out of bed. Despite dozens of doctors’ visits, no one could tell him what was wrong.

“It was an emotional and mental struggle throughout that whole time period,” Patrick recalled. “I just wanted to go and play with my friends and I wasn’t able to. It really led to a lot of isolation and a feeling of loneliness.”

The culprit turned out to be Lyme disease, which Patrick learned only after visiting a relative who specialized in treating the ailment. It appears he had contracted the disease from a tick bite discovered after returning home from a camp.

Medication helped, but the illness ravaged his body. Brain damage left him reading at a first-grade level. A doctor said he’d probably never go back to school and Patrick became extremely depressed. He even attempted suicide.

“That was the turning point of the story and of my life,” said Patrick, who chronicled his experience in a book titled, Fighting for My Life: How I Found God and Beat Lyme Disease. “When I lived after that, I had something inside of me that said I have more to live for.”

Patrick credits his family and faith with helping him triumph. He re-learned to read, write and walk. Infectious disease specialist Dr. Fredric Silverblatt told him exercise helps one overcome Lyme. Patrick took that advice to heart and pressed onward.

His battle shows “that there’s always hope and that there’s always purpose,” said Patrick, an Attleboro High School graduate. “In suffering, a lot of times we might feel overwhelmed that everything is happening to us. I want readers to know there’s always a purpose to their suffering and to look at it from a different perspective.”

Patrick, who transferred from UMass-Dartmouth, is majoring in physical education with a concentration in exercise science/health fitness. He praises BSU’s welcoming atmosphere and faculty who challenge him and offer career guidance while being open to hearing his story.

Now, he focuses on taking care of himself by exercising and eating right. He also pauses before track practices to reflect on his remarkable journey.

“It blows me away,” Patrick said. “I worked with a physical therapist to learn to walk again and now I’m running at a collegiate level… Just being in college and being on the track team here means so much more to me because I’ve worked so hard to get here and I’ve come so far.”