NEWS: UK forestry worker to sue government because he got Lyme disease on the job 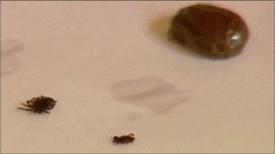 A man who became seriously ill with Lyme disease after getting a tick bite on the job is suing the UK's Forestry Commission for damages. He claims the agency did not do enough to warn or protect its employees from the infection.

A man who became seriously ill after contracting Lyme Disease from an infected tick bite is suing his employers for £80,000 damages.

Iain MacEchern, 57, claims the Forestry Commission did not do enough to warn or protect staff from the infection, which can cause arthritis if left untreated.

He has worked for the agency for more than 20 years in the Lorne area of Argyll and Bute.

The commission is contesting the action at the Court of Session in Edinburgh.

Mr MacEchern, from Duror, Appin, in Argyll, fell ill in September 2007 and his symptoms were later diagnosed in hospital as being caused by Lyme Disease.

The bacterial infection is transmitted from animals to humans through tick bites.

Mr MacEchern maintains that by a week after the first symptoms he was almost unable to walk and was in extreme pain.

He said he “almost died” and was in hospital for months, during which time he was confused and had bizarre dreams and delusions.

The forestry worker is also said to have had severe back pain and underwent emergency surgery following internal bleeding.

Mr MacEchern also said his legs have little sensation and his balance is significantly impaired and he cannot walk on rough or sloping ground without help.

Click here to read the rest of the article .