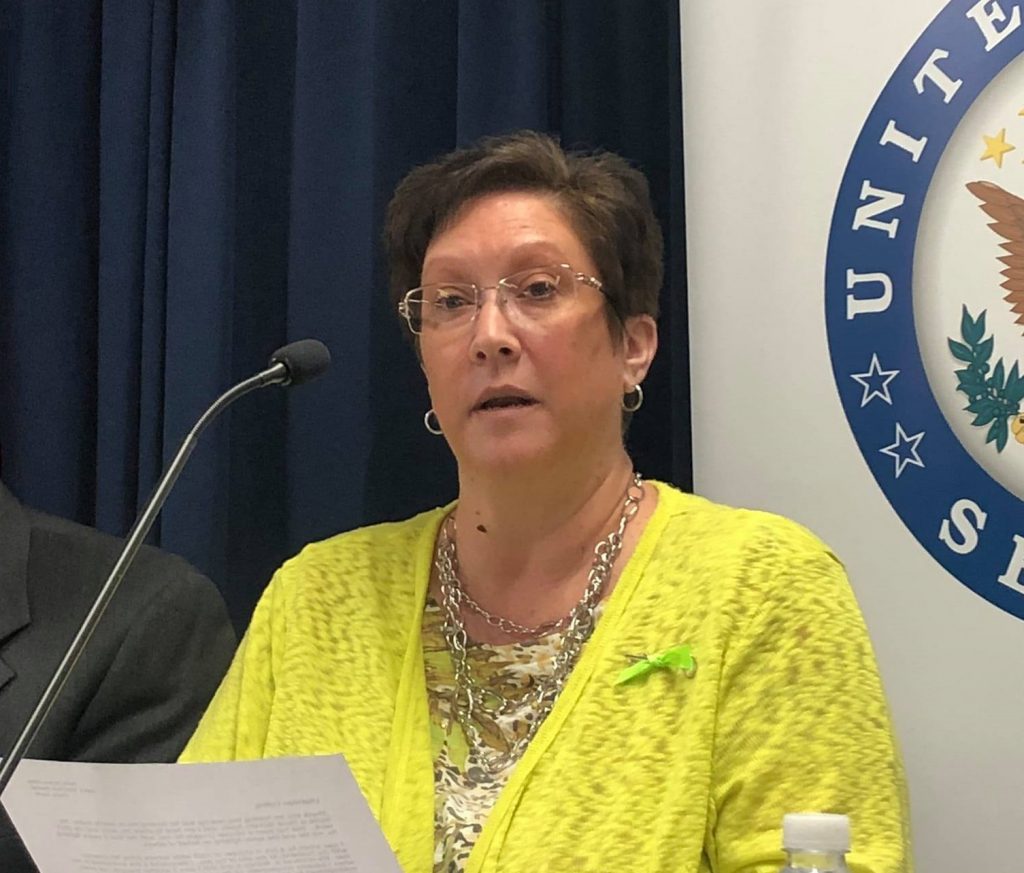 On Thursday, Sept. 5, I was invited by Sen. Susan Collins to testify at the United States Senate Aging Committee hearing on the TICK Act: An Urgent Public Health Response to Tick-Borne Diseases.

It was not an easy task for me to summarize my personal story and convey the continued suffering of others condensed into five minutes. Thankfully, I was able to elaborate more in my four-page, double-sided written testimony with a 58-page appendix.

This was not the first time a politician has spoken up with the promise to make things better. (Now I want to interject this larger-than-life statement: “No one person has the power to fix this!”)

Many people in many positions are needed to help further a broken cause, to help institute needed changes, and to mend a broken system. My anxiety came from knowing that we’ve been down this road before and the outcome did not make a difference in the lives of those suffering from tick-borne disease.

It’s 2019 and we are still losing people to this disease.

The field hearing was held in Orono at the University of Maine Cooperative Extension Tick Lab. The room was packed. Among the invited guests were reporters, patients, medical providers, representatives from the Maine Center for Disease Control & Prevention, as well as the staff from the tick lab.

I felt overwhelmed and emotional when Collins entered the building. As she greeted people in the hallway and turned to me, I put forth my hand and with a shaky voice said, “Good morning, Senator Collins. I am Paula Jackson Jones.”

She grabbed my hands and embraced me. You see, although I had been working closely with her office on the TICK Act bill, this was the first time I met her in person.

She acknowledged my personal suffering and thanked me for everything I am doing. When I stated that I was “merely one of thousands of foot soldiers in this army,” she grabbed me by the shoulders, looked me straight in the eyes, and said, “But, Paula, you are our general.” I immediately found renewed strength in her tone.

Collins shares: “To knock out Lyme and other tick-borne diseases, we need a unified approach with leadership at the federal level and resources at the local level. These diseases present grave risks to our public health and serious harm to our families. The sooner we acknowledge these risks and coordinate efforts to overcome them, the better for all of us who enjoy the outdoors. The TICK Act does just that by applying a three-pronged public health approach to address Lyme and other vector-borne diseases:

• Establishes an Office of Oversight and Coordination at HHS to develop a national strategy, expand research, improve testing, and coordinate common efforts with DOD, USDA, EPA, and the Departments of Interior and Homeland Security

• Reauthorizes Regional Centers of Excellence in Vector-Borne Disease at $10 million for each of FY2021-FY2026. These centers collaborate with academia and public health agencies for surveillance, prevention, outbreak response.

• Authorizes CDC Grants at $20 million for each of FY2021-FY2026 to state health departments to build a public health infrastructure for Lyme and other tick and vector-borne diseases, and expand initiatives through public-private partnerships.”

At the witness table with me sat Dr. Lyle Petersen, the director of the division of vector-borne diseases, National Center for Emerging and Zoonotic Infectious Diseases for the federal Centers of Disease Control and Prevention; Dr. Jim Dill, pest control specialist for the University of Maine Cooperative Extension Tick Lab; and Maine senator Dr. Sean McCloy, the medical director for Integrative Health Center of Maine and Christopher Philbrook, a fellow patient advocate, a former aide to Collins, and a board member of Project Lyme.

The day before the hearing, I met with Petersen and his associate, Dr. Susanna Visser. They asked me to share my personal story and not to hold back. They said their job was to collect all the broken pieces and help determine a plan for change.

So with that, I unleashed 10 years of pain and suffering, of loss and frustration, of roadblocks and redundancy, of lip service and disappointment. At the end, I was shaking, but I held back my tears until I heard, “I’m sorry that we failed you.”

These people didn’t personally hurt me. But they belong to a group that has hurt and failed hundreds of thousands of patients over the past four decades.

Hope on the federal level?

Now, I’m going to remind to you that “no one person has the power to fix this!” But there are many people in positions to promote change, and for the first time in a very long time, I felt hope.

I normally feel hopeful and make it my duty to instill hope in others. But this is different. This is acknowledgement at a federal level that matches the cries from the trenches. It is an acknowledgement of everything that is broken, that has failed, and of what needs to be done.

Rome was not built in a day and it will not be undone in a day. Not everything needs to be discarded. But we need a group that is able and willing to go through this, piece by piece, and repair, remove, or replace in order to rehabilitate and reform a broken and heavily damaged system.

And there will be pushback from all sides. Some groups feel that they need to have their anger and resentment heard and validated. Others think this is all a media hype and insist on following outdated guidelines and protocols. Still others are wandering aimlessly without hope of any change.

I listened closely as each of my fellow witnesses spoke in great detail about why the TICK Act bill was needed and what it would accomplish if/when passed into law.

You see, it is a federal bill that would trickle down and reach the trenches. I made sure of that when I was asked to give input to the wording of the bill. We have no right passing laws if they are not going to be enforced and make a difference in people’s lives.

In Maine, we have several laws regarding Lyme and tick-borne disease, but to date, nothing that has made a huge difference for patients or providers.

At the end of the hearing, Collins asked if anyone had anything else that they wanted to be added to the congressional record. My hand flew into the air.

I seized the moment and stated that “not only do we need better testing and treatment options, we need diagnostic codes so that as a patient’s symptoms transition from acute to chronic, the medical providers will have direction for treatment and the insurance companies can accept and cover. If we can’t agree on what to call it, how can we possibly agree on treating it?”

The senator agreed with me, and Dill further backed up my statement by stating that “of the ticks tested in the lab, about 8 percent have more than one tick-borne disease (also known as a co-infection, meaning more than one).”

After all this time, we’re slowly getting on the same page, we’re all saying the same thing, and we’re hearing the suffering and the brokenness being acknowledged.

I will leave this with you with this thought: $75 billion per year is the total direct and indirect cost of Lyme disease. Many who have lost their lives to tick-borne disease can not even have it listed on the death certificate as the causative agent.

Until the seriousness of tick-borne disease is given the attention and respect it deserves, patients and families will continue to suffer. Passing the TICK Act bill into law would provide a lifeline to patients and doctors everywhere.

You can watch the full hearing here.