Special Collection: The Rise of Ticks and Tick-Borne Diseases 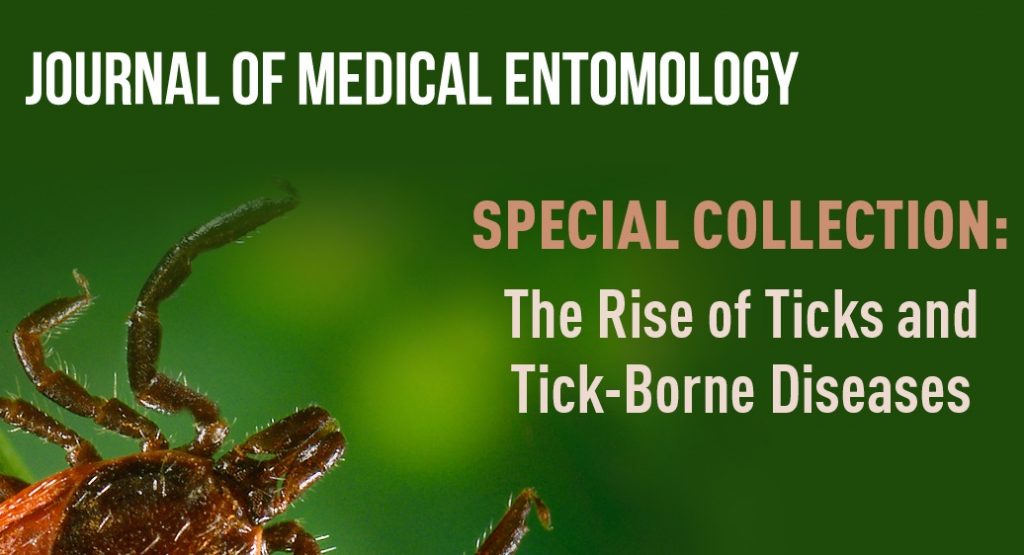 A special collection of articles curated by scientists at the CDC has been published in the Journal of Medical Entomology.

The articles, written by a variety of experts in the field, focus on the rise of ticks and tick-borne diseases in the United States.

They are freely available to read and download through May 1, 2022.

Ticks and tick-borne diseases have been recognized as threats to the health of humans and domestic animals for more than a century in the United States. However, as outlined in the following series of papers, the nature of this threat has evolved over time in response to changes in the natural environment, tick and wild animal populations, and human land use.

In recent decades, tick-borne disease (TBD) cases and established populations of medically important ticks have been reported over expanding geographic areas, and an increasing number of tick-borne bacteria, viruses, and protozoans have been recognized as human pathogens, collectively contributing to an increasing burden of TBDs in the United States.

Prevention and diagnosis of tick-borne diseases are improved by access to current and accurate information on where medically important ticks and their associated human and veterinary pathogens are present, their local abundance or prevalence, and when ticks are actively seeking hosts. The true extent of tick and tick-borne pathogen expansion is poorly defined, in part because of a lack of nationally standardized tick surveillance.

Spirochetes of the family Borreliaceae are, with one exception, tick-borne pathogens of a variety of vertebrates. The family at present comprises two genera: Borrelia, which includes the agents of relapsing fever, avian spirochetosis, and bovine borreliosis, and Borreliella, which includes the agents of Lyme disease and was formerly known as “Borrelia burgdorferi sensu lato complex.”

The global climate has been changing over the last century due to greenhouse gas emissions and will continue to change over this century, accelerating without effective global efforts to reduce emissions. Ticks and tick-borne diseases (TTBDs) are inherently climate-sensitive due to the sensitivity of tick life cycles to climate.

In this forum paper, we focus on how land use changes have shaped the eco-epidemiology of Ixodes scapularis-borne pathogens, in particular the Lyme disease spirochete Borrelia burgdorferi sensu stricto in the eastern United States. We use this as a model system, addressing other tick-borne disease systems as needed to illustrate patterns or processes.

Wildlife vertebrate hosts are integral to enzootic cycles of tick-borne pathogens, and in some cases have played key roles in the recent rise of ticks and tick-borne diseases in North America. In this forum article, we highlight roles that wildlife hosts play in the maintenance and transmission of zoonotic, companion animal, livestock and wildlife tick-borne pathogens.

Development of tick control tools have focused primarily on the blacklegged tick, Ixodes scapularis Say. Application of acaricides or entomopathogenic fungal agents to kill host-seeking ticks or ticks on rodents can suppress I. scapularis abundance in residential landscapes, but evidence is lacking for impact on human tick bites or tick-borne disease.