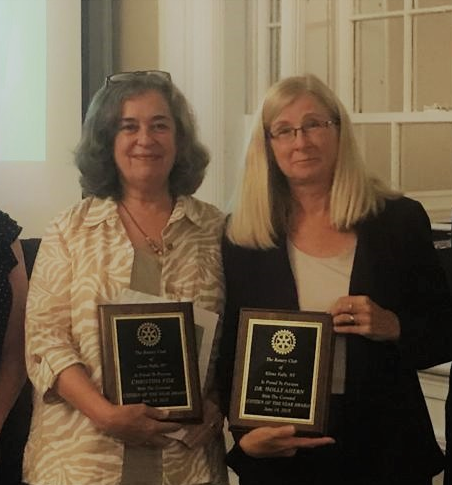 The Rotary Club of Glens Falls, New York, has bestowed the Citizen of the Year award to Holly Ahern and Christina Fisk. The women are co-founders of the Lyme Action Network, a nationally recognized advocacy group.

Ahern is an award-winning professor of microbiology at SUNY Adirondack, where she teaches and mentors undergraduate students in research.

Fisk spent most of her career as a principle at JIMAPCO Inc., the map publishing company. Her foray into the Lyme disease arena began around 2002 when her daughter became ill. This became a “job” when she and Ahern compared notes and decided there had to be a better way to go about alerting people to the confusions and complications surrounding this topic than currently existed. In addition to her daughter, Lyme has caused serious problems for both her husband and her brother.

Fisk is co-founder and president of the Lyme Action Network, serves on the Governor’s Tick-borne Disease Working Group, and is a member of the New York State Coalition on Lyme and Tick-borne diseases.

The Glens Falls Rotary Club recognizes community leaders each year who exemplify the Rotary motto of “Service Above Self.” The club has partnered with the Lyme Action Network for several years in both community outreach and as a conduit to the larger Rotary International organization to make Lyme and tick-borne disease a priority.