Has your Congressional representative joined the Lyme Caucus? 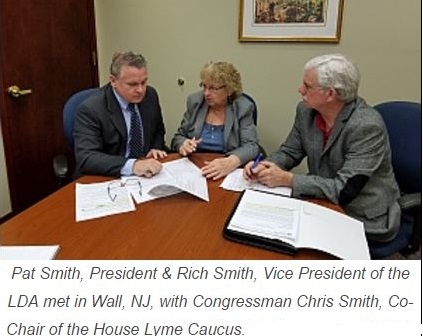 Announcement from the Lyme Disease Association:

May is Lyme Disease Awareness Month.  Let’s get our Representatives in the US House of Representatives to sign up for the House Lyme Caucus. It is a bi-partisan group working together in Congress to take action on Lyme & other tick-borne diseases.

Under the leadership of Congressmen Chris Smith (NJ) and co-chair Colin Peterson (MN), it has initiated letters and actions to benefit Lyme patients, such as the inclusion of the monies for Lyme & tick-borne diseases into the Congressionally Directed Medical Research Program (CDMRP) and language and Lyme monies into Appropriations over the years and initiated favorable legislation.

Additionally, it has queried government agencies over policies not favorable to patients. This has reminded the agencies that someone is looking over their shoulder. Many meetings have been held and educational sessions in DC for Congress.

Remind them the Lyme disease tick is now found in 50% of US counties and there were almost 400,000 cases in 2015. There are about 20 tick-borne diseases now in the U.S. being spread by at least eight different ticks, not just the blacklegged/deer tick.

Send them to the newly revised Lyme Disease Association LymeR Primer information brochure where they can read about them. Ask them what they have done about this emerging epidemic of tick-borne diseases where 30% of reported cases of Lyme are children ages 0-19.

Tell your Representative you will be calling back in a week to see if he/she signed up. Then do so! We will add new names as we receive them from the Caucus.

More about the Caucus

The bipartisan Congressional Lyme Disease Task Force, co-chaired by Rep. Chris Smith (R-NJ) and Rep. Collin Peterson (D-MN), is dedicated to educating Members of Congress and staff about Lyme and other tick-borne diseases, as well as advancing initiatives that are designed to help the estimated 400,000 Americans who develop Lyme disease each year and all of those living with the disease.

As co-chairs of the bipartisan Task Force, Rep. Smith and Rep. Peterson lead annual appropriations requests in support of Lyme disease research through the Department of Health and Human Services and for research funding at the Department of Defense.

In 2015, the caucus secured for the first time ever, $5 million in funding in the House Appropriations Committee annual military spending legislation, which was adopted in the Fiscal Year 2016 funding bill which was signed into law, and will provide resources for Lyme disease research through DOD’s innovative, high-risk, high-reward program.

Recently, the caucus secured another major win for Lyme disease. In December of 2016, the United States House of Representatives passed, and then-President Obama signed, the 21st Century Cures Act.