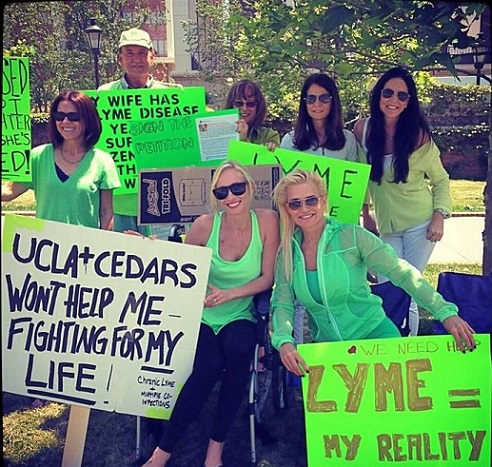 In Santa Monica, people with Lyme disease and their advocates will gather at Palisades Park on Sunday, May 18, from 12 noon to 4 p.m.

In the US, the Centers for Disease Control and Prevention (CDC) made headlines last year by increasing its estimate of Lyme disease from 30,000 to 300,000 cases annually. However, that number only refers to officially diagnosed cases of the tick-borne illness. Because of widespread “Lyme denialism” by the CDC and the medical establishment, hundreds of thousands of additional cases of Lyme disease go undiagnosed and untreated—while people are left to suffer.

“Lyme denialism is rampant in Southern California,” according to Sandi Bohle, organizer of the local event. “People in our area are routinely told by their doctors that they couldn’t possibly have Lyme disease, because supposedly it doesn’t exist around here.”

Because they miss the opportunity for early treatment—the best chance for recovery—the disease can burrow into the body and potentially cause a lifetime of misery.

“This leaves Lyme patients in a world of hurt,” says Bohle, a member of a Los Angeles Lyme disease support group. “Their lives are totally disrupted by pain and disability, and they can’t get the treatment they need.”

Lyme disease is a bacterial infection transmitted by the bite of Ixodes ticks, which are carried by deer, rodents, and birds, and often found in wooded areas and grassy fields. Ticks are tiny and their bite is painless. Thus, many people who catch Lyme don’t even realize they’ve been bitten.

In 2013, Lyme-infected ticks were found in seven Los Angeles-area parks, from Malibu to the South Bay. Infected ticks have also been found in Orange and San Diego counties.

Early signs of infection may include a bull’s-eye rash and flu-like symptoms, such as fever, muscle aches, headaches, and fatigue. Later, Lyme disease can invade multiple organs of the body, resulting in neurological disorders, crippling muscle and joint pain, disabling fatigue, heart problems, and other serious symptoms.

The May 18 event is co-sponsored by the LA Lymie Group and LymeDisease.org, a national advocacy organization. More information about the event at www.lymedisease.org.

WHO:      People with Lyme disease and Lyme advocates

WHERE:  Palisades Park, Santa Monica. Meet at the gazebo on Ocean Boulevard between Washington and Idaho.