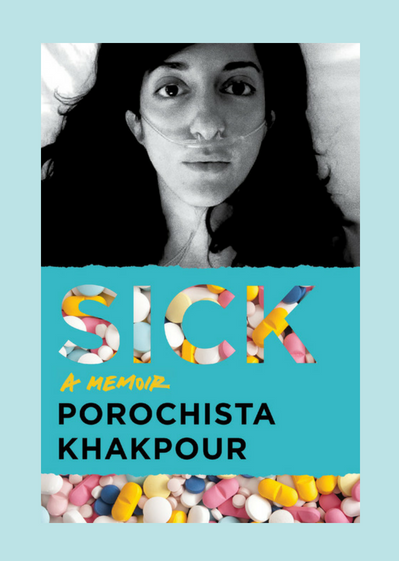 Porochista Khakpour’s insightful and haunting narrative of her battle with incurable late-stage Lyme disease is more than a memoir of her own illness.

In Sick, Khakpour spotlights America’s diseased health care system, and in particular how it infects the most vulnerable: immigrants; citizens of different races, nationalities and religions; and women, specifically those living with a disabling chronic illness.

Khakpour provides evidence that women suffer most from Lyme disease and other autoimmune illnesses like my own, multiple sclerosis.  The reality is that women like Khakpour with mysterious physical illnesses spend years in torment before confirmation of a diagnosis.

The underlying theme of her frustrating, sad, and maddening journey was not just the inability of medical practitioners to diagnose her Lyme disease and communicate with each other, but that doctors believed it to be in her mind simply because of her gender.

Khakpour was forced to be her own medical advocate in the search for a diagnosis, while she also focused on her writing and search for teaching jobs.

“My full-time job became my health,” Khakpour writes. “None of the doctors spoke to each other, specialists were piled on top of specialists, each tugging and turning me in their own directions,” she bemoans.

For the healthy reader who sees a doctor occasionally for a yearly check-up, bad case of the flu, or a broken arm, Khakpour’s story may be shocking. For the chronically ill female reader like myself, Khakpour becomes a sister and fellow marginalized traveler.

True, I am not a queer woman of color or a Muslim like Khakpour, but our identities and experiences as women battling disabling chronic illnesses in an ableist patriarchy, along with her honesty and candor, make me identify and empathize with her as she recounts a dismissive friend telling her a warm environment would solve her problems, and an ER doctor who told her to go to a psychiatric hospital.

These experiences resonated with my own journey. Like Khakpour, my own vision, cognition, memory, energy, and mobility difficulties were often invalidated by well-meaning but uninformed family and friends, colleagues ignorant of and disturbed by my illness, or by ER and interim doctors outside of my own (female) internist.

Trauma is the thread running throughout Khakpour’s narrative: the trauma of being a baby during the Iranian Revolution, a toddler in a war zone, a refugee and immigrant in a racist and xenophobic country that has taken a starker turn under the Trump administration. In 1979, Khakpour was born in Tehran and lived as a toddler during the Iran-Iraq War before her family left as refugees and gained asylum in the United States.

She grew up in Los Angeles and explains how her L.A. doctors patronized or ignored her concerns. Even before her struggles with Lyme disease, as a child she felt like an outsider in her adopted city, frequently sick, plagued with depression and thoughts of suicide.

Years later, Khakpour continued to live with depression, anxiety, suicidal feelings and drug addiction that living with undiagnosed Lyme disease exacerbated. She says that she never became addicted to the recreational drugs she had taken – only the benzodiazepines her doctors prescribed.

A rape survivor injured in two severe auto accidents, Khakpour is a chronically ill woman living in a country that does not offer universal health care. She gauges that she has spent more than $100,000 on treating her Lyme disease.

Until a second physician confirmed the Lyme disease diagnosis that led her to appropriate treatment, she endured chronic joint pain that required her to walk with a cane after her diagnosis, dangerous fevers, chronic insomnia, fainting, fatigue and depression.

Several medical professionals told her what she was experiencing was psychiatric and not physical, yet when she finally resigned herself to the idea of a psychiatric ward, she was not admitted because “[she] could not get ‘medically cleared’ to go to the psychiatric ward.”

Adding to her traumatic childhood and adolescence were her battling parents and enraged father. Khakpour explains that her writing stories centered her and provided her with purpose. She recounts that as a little girl “storytelling . . .  was a way to survive things.”

This is even clearer in Sick where she builds upon the theme of marginalization that she explored in her previous fiction, the novels Sons and Other Flammable Objects and The Last Illusion. At one point in Sick, Khakpour quotes her mother describing America itself as sick.

The racism and xenophobia she and her family encountered in the wake of the 1978 Iranian Revolution shifted to all Middle Easterners after 9/11 in 2001, just as some white Americans found Persians and Arabs indistinguishable years before.

That same misunderstanding and alienation feels eerily parallel to her life with Lyme disease. Though recognized by the Centers for Disease Control, Lyme disease remains misunderstood, misdiagnosed, and mishandled by medical professionals. Among the illnesses doctors believed Khakpour had before her Lyme diagnosis were multiple sclerosis and scleroderma.

America’s many forms of unwellness haunt Khakpour – racism, Islamophobia, misogyny, and lack of universal health care (throughout the bulk of Sick, Khakpour is uninsured; Lyme disease is also an illness not covered by medical insurance).

Sick‘s compelling truth makes this memoir essential reading as a medical mystery story and also a very telling story about American health care and its treatment of the vulnerable, now and for years to come.

This review originally appeared on The National Book Review website.

Laura Durnell’s work has appeared in The Huffington Post, Fifth Wednesday Journal, Room, The Antigonish Review, Women’s Media Center, Garnet News, others. She currently teaches at DePaul University, tutors at Wilbur Wright College, one of the City Colleges of Chicago, and is working on her first novel. Twitter handle:  @lauradurnell