HHS’s Eric Hargan tells advocates: “We can bring about a Lyme tipping point” 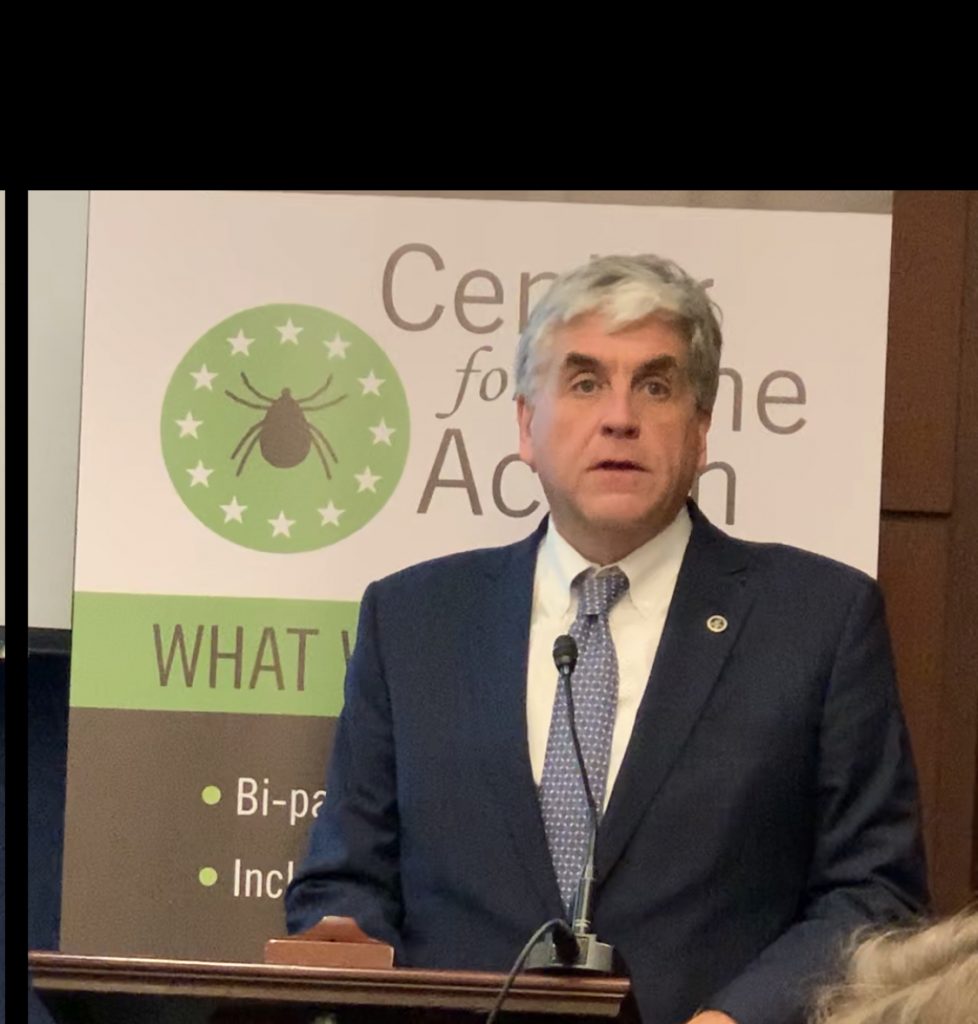 Eric D. Hargan is the Deputy Secretary of the Department of Health and Human Services (HHS). He delivered the following remarks to attendees at the recent “Lyme Action Fly-in” event in Washington DC.

Good evening, everyone. It’s great to be with you all.

Before I begin, I want to specifically thank you all for your continual efforts, dedication and commitment to this important cause.

The work you do matters, and I know it’s a source of encouragement and hope to those struggling with Lyme disease and other tick-borne illnesses. So, thank you for the work you do.

Please know that you have strong support and attention on this issue from President Trump, Secretary Azar, and me. This entire administration stands with you.

While many of you know this issue very well, for those of you in the audience who may not be familiar with how we see the public health situation around tick-borne diseases, I’ll take a few moments to provide some broad context.

According to a 2018 CDC study, tick-borne diseases more than doubled in the last 13 years, and they comprised 77 percent of all vector-borne disease cases reported in the United States.

One of the reasons for this increase is the significant geographic expansion of ticks and, subsequently, the risk of tick exposure to the American people.

A number of factors that are likely to be contributing to the increase in geographic spread of ticks include changes in land use and expanding suburban development, as well as increased exposure of people and other mammal hosts.

We have a number of tick-borne diseases that affect Americans, caused by bacteria, viruses, and parasites, but Lyme disease remains the most prevalent. According to the CDC, nearly 30,000 new cases of Lyme disease were reported in 2018, but actual cases are estimated to be closer to around 300,000.

This surge in cases is leading to growing public awareness around this issue. Some of you know that the popular singer, Justin Bieber, recently announced that he has Lyme disease. While I think I’m not quite the primary demographic for Mr. Bieber’s music, I know I can speak for us all when I say we wish the very best for Mr. Bieber in his battle against the disease and we’re thankful for his voice, literally, on this issue.

After Justin Bieber shared his diagnosis with the world, our HHS emails and HHS social media accounts surged with messages about Lyme disease. I want you to know that we, at HHS, hear you. We, at HHS, are listening to your input. We, at HHS, are responding and making Lyme and other tick-borne diseases a priority.

How exactly is the Trump Administration prioritizing Lyme disease?

First, as I stated at the outset, fighting tick-borne diseases, and in particular, Lyme disease, is a priority for the President and this Administration. HHS will be leading the charge in this effort, as we do on many serious infectious disease threats—especially around the innovations we need to combat such threats.

Increasing the priority we place on Lyme disease means taking a strategic approach, and it means an increased federal budget for Lyme disease.

Earlier this week, we laid out a vision for how we believe that should work in the President’s 2021 budget, which was just released this week. The Budget requests $189 million, an increase of $58 million, to address tick-borne diseases. This includes $115 million for NIH to expand its research for tick-borne disease, including on prevention, diagnosis, and treatment; and it includes $66 million for CDC activities like tick surveillance, insecticide resistance activities, and development of improved diagnostics. This is a $14 million increase compared with the 2020 enacted level for vector-borne disease activities with CDC—a more than 25 percent budget increase in one year.

The President’s 2021 Budget also proposes an action plan that will prioritize and advance the most promising candidates and technologies for diagnosing and preventing Lyme and other tick-borne diseases.  This plan, which would be led by Admiral Brett Giroir and his Office of the Assistant Secretary for Health, in partnership with NIH, CDC, and the FDA, addresses four primary areas: innovations in diagnosis and advanced detection, developing vaccine-based prevention, ensuring robust domestic surveillance of vector-borne diseases, and providing additional knowledge to advance the best treatment and prevention options.

The action plan laid out in the budget builds on the Kay Hagan Tick Act, which was signed into law by President Trump.

As many of you know, the act was named after the former North Carolina Senator, Kay Hagan, who tragically died in October after a years-long battle with encephalitis, caused by Powassan virus, an emerging tick-borne virus. Much like other tick-borne diseases, cases of Powassan virus continue to rise and, unfortunately, for this virus, there is no vaccine and no specific therapy to combat it once it’s contracted.

Admiral Giroir and the Office of the Assistant Secretary for Health, like our plan in the budget, has been tasked with leading the development of this national strategy.

As Admiral Giroir mentioned at last month’s public meeting of the Tick-Borne Disease Working Group, his office is the ideal place to locate this important work. It is home to the Office of Infectious Disease and HIV/AIDS Policy, which works as a coordinator among HHS operational divisions on infectious challenges like this.

Admiral Giroir and that office also bring to this challenge the experience of having launched President Trump’s initiative to end the HIV epidemic in America. As Herculean as the Ending HIV Epidemic initiative is, in many respects addressing tick-borne diseases is even more challenging.

The scale of these challenges

I raise these issues not to discourage you, but to underscore that we at HHS understand the scale of the challenge we face—and to note how we, as Americans, do solve tough problems when we fund science and focus our attention and collective ingenuity to finding a way. We did it with HIV/AIDS, which today is a manageable condition. We did it with Hepatitis C, which today is curable.

To confront the multifaceted challenges surrounding Lyme disease, we truly need a holistic approach that includes not only physicians and medical scientists, but also epidemiologists, environmental scientists, veterinarians, entomologists, and many other professionals.

There likely will not be a silver bullet for fixing the problems caused by tick-borne illnesses. We must fight this battle on many fronts: by decreasing the ticks in the environment through traditional or innovative means; by better managing the wildlife that carry the ticks; by immunizing people against the viruses or find ways to immunize against the tick itself; and of course, driving innovation toward more sensitive and reliable diagnostics, therapies, and preventive measures including vaccines.

That is an immense array of actions we need to take, and none of it will be possible without continued engagement from the community leaders and activists who’ve brought new levels of attention to this issue.

The Trump administration has made achieving better health for all Americans a top priority, especially through tackling impactable, emerging, and neglected health challenges. Sadly, in some sense, tick-borne disease represent all three—but they also represent an area of focus for us and an area where we believe we can make real progress.

We’re grateful for the bottom-up work that so many have done to illuminate this challenge and drive action.

Thank you for giving us the hope that progress can be made, and I look forward to working with all of you to make it happen. We fully support your community momentum with Lyme Innovation. You have the full support of HHS and the Trump Administration.

This is just the beginning; together, we can bring about a “Lyme Tipping Point” to transform today’s landscape.

Thank you again for having me here this evening.