NEWS: In the midst of medical controversy, Dr. Jones continues to save children with Lyme 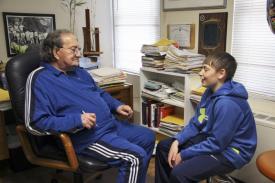 On his 82nd birthday, Dr. Charles Ray Jones sat in his New Haven office at 111 Park St., surrounded by patient files and wearing a blue tracksuit.

Though it has been a long while since Jones could last run — in fact, he now uses a cane to get around — Jones finds himself in a number of races: a medical one with a debilitating disease, a legal one with the Connecticut Medical Board, and even an academic one with Yale.

>Over the past four decades, Jones has treated roughly 10,000 children with severe chronic Lyme disease. Parents from all over the world bring their children to Jones, and many said they consider him their final hope. But despite his popularity with his patients, many in the medical field strongly disagree with his practices, which, they say, treat a form of Lyme disease that does not exist.