NEWS: On Oct. 10, a candlelight vigil for lives lost to Lyme 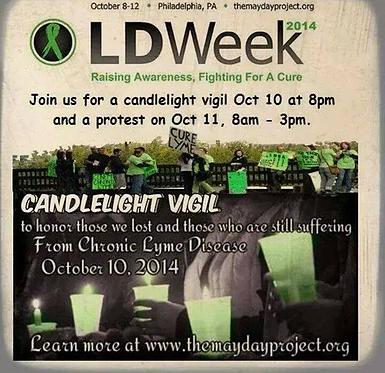 Outside the hotel headquarters of ID Week, the IDSA’s annual conference, people will light candles from those who have died from Lyme.

Press release from The Mayday Project:

PHILADELPHIA, PA—On Friday October 10, chronically ill Lyme disease patients and supporters from around the United States will hold a candlelight vigil to honor those who lost their lives while battling chronic Lyme disease.

The event is organized by The Mayday Project Lyme patient advocacy group. The vigil and a protest rally the following day coincide with IDWeek, an annual medical conference organized by the Infectious Diseases Society of America (IDSA).

Patients are calling on IDSA to update its guidelines for diagnosis and treatment of Lyme disease to reflect the current state of science and improved standards for patient care. They believe shortcomings in IDSA’s guidelines, which are followed by physicians around the world, contribute to widespread misdiagnosis of Lyme patients and ensure that the sickest remain sick.

“I’m tired of losing my friends,” says Mayday co-founder Allison Caruana, who has lost several friends who were battling Lyme. “They were abandoned by the medical establishment and remained severely ill up until their deaths. Although Lyme may not have killed them directly, it certainly robbed them of life.”

The vigil will be held outside the Philadelphia Marriott Downtown, which is designated as the headquarters hotel for IDWeek.

A key concern of activists is the refusal of IDSA to acknowledge the existence of chronic Lyme disease and update its guidelines to reflect the fact that many patients require longer-term treatment beyond the limit of 4 to 8 weeks of antibiotics specified by the IDSA.

Kenneth Liegner, MD, who specializes in internal medicine, critical care, Lyme disease and related illnesses, suggests in a September 2010 letter to the Institute of Medicine, that the refusal to acknowledge the epidemic of chronic Lyme disease is profit-driven:

“An infection that can be chronic and require a long-term treatment approach does not fit the ‘business model’ of managed care: predictable premiums, predictable costs, predictable profit,” says Liegner, who practices in Pawling, NY and has treated hundreds of patients with Lyme disease. “With managed care it became feasible to control costs by defining away the chronic infectious aspects of Lyme disease.”

Mayday co-founder Josh Cutler says: “Chronic Lyme patients, especially those who lost their lives, are casualties of unchecked conflicts of interest and medical neglect. We call on everyone concerned about this injustice to stand with us and pay tribute so their deaths and suffering are not in vain.”

The candlelight vigil will take place from 8 p.m. to 10 p.m. on the public sidewalks outside the Philadelphia Marriott Downtown at 1201 Market Street.

About the Mayday Project
The Mayday Project was formed by a group of volunteers who have been touched by Lyme in some way. They aim to raise awareness about chronic Lyme disease and related tick-borne illnesses. Mayday supporters advocate for more accurate tests, better guidelines, improved access to treatment, increased education for physicians, and more funding for research.