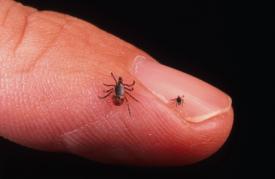 According to a report published by the BC Medical Journal, doctors in British Columbia are unclear about how to diagnose Lyme disease. And if they do diagnose it, they often fail to properly report the case to health authorities.

From the Vancouver Sun:

Most B.C. doctors not trained to diagnose Lyme disease

VANCOUVER — B.C. doctors are failing to comply with a requirement to report all cases of Lyme disease to public health authorities and are confused about diagnosing it, according to a report published in the current B.C. Medical Journal.

Humans can get Lyme disease if they are bitten by an infected tick. The black-legged, sesame-seed-sized tick is found throughout southern B.C.

Two weeks of early treatment with antibiotics is essential to prevent potentially serious long-term disabilities such as arthritis, persistent pain, fatigue, neurological symptoms or even death.

Two-thirds of doctors said they know Lyme disease is a reportable one. And yet, only 10 cases were officially reported to the BC Centre for Disease Control last year, a number similar to previous years.

Sixty-three per cent of doctors said they were unaware that a bulls-eye rash is the only symptom they need to see in order to make a clinical diagnosis of Lyme disease.

Such a rash means a prescription for antibiotics can be given without the need for laboratory testing.