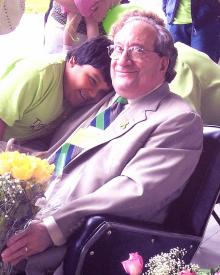 Death by a Thousand Cuts. The Connecticut Medical Board has been prosecuting and persecuting Dr. Jones for more than five years, imposing draconian fines and requiring him to hire — and pay for — a monitor who reviews his patients’ charts. This is a huge monthly expense. His lawyer has filed appeals and is doing everything he can to free Dr. Jones from these unfair burdens and allow him to concentrate on his main job — helping very sick children. But legal bills are mounting, and fundraising is lagging. Dr. Jones is appealing to the Lyme community to help. His case is iconic: win or lose, it will have a tremendous impact on patients’ ability to secure treatment for their chronic Lyme disease. Please help if you can.

I want to update you regarding the progress in my legal defense.This of
course pertains to the charges which were brought against me by the
Connecticut Department of Public Health, and heard by the Connecticut
Medical Examining Board (CMEB).

Contrary to some newspaper accounts, I have not lost my legal battle.On
the contrary, I have continued to practice without restrictions, aside
from monitoring, during the more than six years that I have been
fighting these charges:as a result, several hundreds of children have
been able to receive treatment for their tick borne diseases!

Appeals are underway, and it is imperative that these go forward.(See
below for more details).This has required a flurry of legal activity,
and as a result my legal defense fund is again seriously in arrears.It
would not be possible for me to fight these charges without the backing
of the Lyme community, and it is time once again to appeal to you for
donations.No amount is too small!It is with deep appreciation that I ask
you to please send your checks as follows (the Paypal option is not
available at this time):

(Note “gift” in the memo field)

For the remainder of this letter, I will focus on developments since my
last communication to you.For more information regarding the history and
details of my legal defense, please refer to the website
www.drjoneskids.com .

**As you may recall, the first set of charges pertained to two
Nevadachildren who were _successfully_ treated by me. The CMEB ordered a
two year period of monitoring, now concluded, as well as a $10,000 fine,
which has been held in escrow pending the outcome of the litigation.Of
particular concern in that case, the CMEB imposed of a four-part, highly
restrictive standard of care for the diagnosis and treatment of Lyme
disease./That standard would set a dangerous precedent, making it even
more difficult to treat Lyme disease according to clinical judgment, if
allowed to remain unopposed/.It has been suspended, pending the outcome
of my appeal.

The central claims on appeal pertain to two key points:

·The bias of one of the members of the hearing panel, Dr. Senechal, who
had made highly derogatory statements about Lyme practitioners and the
laboratories to which they refer while serving on the hearing panel;

·The application an improper standard of proof to the proceedings, which
made it easier for the CMEB to rule against me.

Both of these claims were rejected by the Appellate Court.We are now
planning to seek certification to appeal to the Connecticut Supreme
Court, where we are optimistic that we will receive a just and
appropriate hearing.The petition for certification is due by the end of
this month.

A second set of charges also was brought against me.These involved three
different cases, which were “conjoined” into one proceeding.Once again,
none of the patients involved had sustained any harm from treatment, and
my attorneys succeeded in having the first of these cases dismissed
entirely.They also succeeded in having Dr. Zemel’s testimony as an
expert witness completely dismissed by the CMEB as biased; this will
limit his ability to testify in this capacity in other proceedings
against LLMD’s as well.

The second case involved a child with an EM rash which was documented
but not treated at StamfordHospital; and who also tested positive for
Babesiosis.This case was quite complex medically, raising my concern
over the relative risk of a treatment delay.It also raised questions
about the appropriate diagnosis and treatment of Babesia infections.Dr.
Peter Krause was called in to testify as an expert witness by the
Department.

The remaining case involved my decision to order diagnostic testing for
two youngsters before I could schedule an office visit.Although the
tests were conducted, the patients cancelled their appointments, and
were never seen or treated by me.

The Connecticut Medical Examining Board found against me in both of
these cases.As a result, they imposed a second $10,000 fine (also held
in escrow, pending the outcome of the second appeal), and four more
years of monitoring.The cost of this monitoring has been incredibly
expensive, due to the need to retain a commercial monitoring service,
because I could not locate any physician in my immediate practice area
willing to take on the responsibility.All of the monitor’s reports have
been positive.In fact, the monitoring agency recommended a reduction in
monitoring as a result, but their proposal was rejected by the CMEB.

The Superior Court sustained my appeal of one of the issues in the
second case, which is a victory:the CMEB had found me guilty of failing
to make a differential diagnosis.This was not something that the
Department of Public Health had charged me with in the first place and,
as a result, I had no opportunity to defend myself against this charge
during the proceedings.The Connecticut Medical Examining Board is going
to reconsider this issue and the Department of Public Health has filed a
motion to re-argue the Superior Court decision.We have appealed
additional aspects of the Superior Court decision to the Appellate Court.

I hope that this update has been helpful in explaining the scope of the
charges which I have been fighting, as well as the complex and extensive
legal defense that has been mounted on my behalf.I hope too that you
will be able to donate to my legal defense fund as soon as possible, in
whatever amount your circumstances permit.