NEWS: "I feel like something is killing me from the inside out." 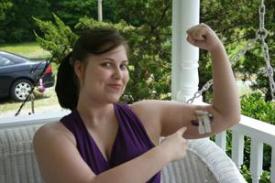 A North Carolina newspaper interviews a young woman who has been battling Lyme for five years–and fighting for a diagnosis.

From the News of Orange County (Hillsborough, NC)

The average 23-year-old doesn’t typically rejoice upon discovering she does, in fact, have a disease.

But Whitney Corn has long given up the fantasy of being a normal girl. To her—and her mother, Kathy—the test confirming she had late-stage Lyme disease came as a sort of miracle.

“Oh my gosh, I cried when I saw the positive test,” Corn said. “It was so wonderful to see it. I was so happy to see a positive Lyme test.”

The Hillsborough native had been suffering from the disease for five years—five long years of running from doctor to doctor, chasing possible ailments and potential treatments. Slowly, Corn’s health deteriorated, preventing her from attending UNC-Chapel Hill after graduating high school and eventually confining her to her living room couch.

Though knowing the name of her assailant scored Corn a victory on many accounts, the effects of going five years misdiagnosed still took its toll. The Lyme bacteria, called a spirochete, has now penetrated all of her organs, drilling into her cells and causing immense, constant pain.

“I don’t know which I hate more, the spirochetes that are killing me or the ticks that gave me the virus,” Corn said. “I’ve been sick for years. I feel like I’m dying inside. I feel like something is killing me from the inside out.”