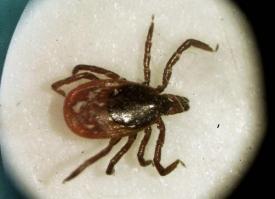 The Star-Tribune reports that black-legged ticks have been detected in all metro counties in Minnesota for the past several years.

From the Star-Tribune (Minnesota):

Mild winters and the area’s woodsiness are being blamed for the deer ticks’ march through all the metro counties.

The prime carriers of Lyme disease may be coming soon to a metro neighborhood near you. Formerly known as deer ticks and ranging across the central Minnesota lakes areas, black-legged ticks have been detected in all metro counties for the past several years.

They appear to be increasing their range westward across the metro, said Mike McLean, spokesman for the Metropolitan Mosquito Control District, which tracks tick populations.

Their metrowide spread was noted for the first time in 2007, then again in 2008 and 2009. They’ve been more noticeable in the northeast and eastern parts of the metro area than in the southwest.

That movement is probably the result of two things, McLean said: an increasingly close link between woods and residential areas, and mild winters in recent years, which have allowed mice and other small mammals, ticks’ chief source of blood snacks, to thrive.