NEWS: "As Lyme disease spreads, so does dispute on how to treat it" 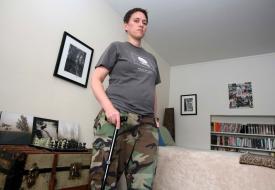 As Lyme disease cases increase in Wisconsin, a Madison newspaper delves into the confusion and controversy surrounding the issue.

From The Cap Times (Madison, WI):

Ticked off: As Lyme disease spreads, so does dispute on how to treat it

When she first got sick, Della Haugen figured she was just tired. It was spring 2008 and she’d been working overtime as a photojournalist for WISC-TV/Channel 3 in Madison, covering flooding in the Wisconsin Dells. But then her symptoms got worse — much worse. Joint pain. Dizziness. Headaches. Muscle weakness. Night sweats so bad, she had to change her sheets. And weird bruises all over her body. Her doctor told her she had the flu.

One sleepless night, Haugen, 36, found a hitchhiker in her bed: a tiny tick. She flushed it down the toilet, realizing too late that she may have destroyed key evidence. Haugen visited her doctor again and asked to be tested for Lyme disease, an infection ticks transmit to people. The test came back negative. Clinic staff told her she had anemia, gave her some iron pills, and sent her home.

Haugen started looking for help online. She learned that Lyme is difficult to diagnose and that tests for it are notoriously inaccurate. By October, Haugen was sure she had Lyme; her doctor was not. Only after “begging,” she recalls, was she able to persuade her doctor to give her 28 days of antibiotics. Haugen soon felt better. But six months later, her symptoms returned with a vengeance. Haugen almost fell asleep on her scooter driving to work. She felt depressed and anxious. Her thinking was muddled, her memory shot. (This account is based on notes she took to keep track of the ordeal.)

A year after her strange illness began, Haugen left her job and applied for disability. All the while, even when she ended up in the emergency room with chest pains, gasping for breath, she says, doctors insisted there was nothing wrong with her — physically, at least. The worst moment, she says, was when a rheumatologist patted her hand, told her it was all in her head, and suggested she read a few self-help books. “I left bawling,” she says. “But it persuaded me to look elsewhere.” She finally found a doctor in Waupaca who diagnosed her with chronic Lyme as well as another tick-borne infection, based on his observations and results from a California lab that specializes in diagnosing Lyme. “I used to think doctors would really try to listen and help you figure your symptoms out,” she says. “But the medical community let me down.”