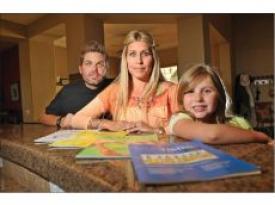 A battery of tests at a prestigious medical clinic showed nothing amiss, yet this California woman was clearing dying. Told she was weeks from death, she finally went to a Lyme specialist. After two years of treatment, she's now gotten her life back.

From the Victorville, CA, Daily Press:

It started when the athletic 29-year-old Hesperia mother suddenly developed migraines, dizziness, fainting spells, and stroke-like symptoms. Her heart went through strange rhythms, but it looked healthy in tests.

“This hit me like a brick wall,” Brown said. “Each week I would visit another doctor. I was quickly failing.”

But tests showed nothing.

Soon, her legs were too weak for Brown to walk on her own. At various points she was diagnosed for lupus and rheumatoid arthritis, but her illness didn’t respond to treatment. A $50,000 battery of tests at the Mayo Clinic in Scottsdale, Ariz. confirmed that something was causing Brown’s body to fail — but they couldn’t identify it.

On a visit to Loma Linda, staff took Brown’s husband Jeremy aside and said she had only weeks to live. They offered to have her blood frozen so that after she died, they might one day find out what was wrong.

“That’s the only hope they would give him,” Brown said. “They said I probably had something so new, not many people had been infected yet.”

By that time, Brown was down to about 82 pounds. She went home and started writing letters to her 2-year-old daughter Brennley — things she wanted to tell her on her first day of school, or when she got married.

But her husband wouldn’t let her give up. “When they say your better half, they’re not kidding,” Brown said.

They tried doctors in Mexico, and finally, a holistic doctor who suggested Lyme disease. They were dubious – until they went home and pored over the Internet.

The symptoms matched everything that didn’t jibe with Brown’s other diagnoses — heart failure, seizures, lesions on the brain, ulcerated stomach, searing pain, inability to walk.