NEWS: Actress Jane Alexander tells LA Times she's had Lyme herself, and she's pushing hard for "Under Our Skin" to get an Oscar nomination 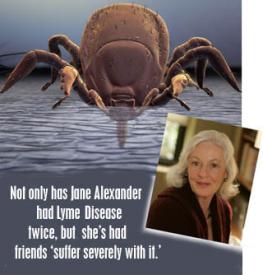 Not only has Jane Alexander had Lyme disease twice, she's had friends "suffer severely from it."

Four-time Oscar nominee Jane Alexander is rallying behind a controversial film on the academy’s list of semi-finalists for best documentary feature — "Under Our Skin."

Among its critics, for example, is Entertainment Weekly’s Owen Gleiberman, who believes the film "embraces, with bits and pieces of skimpy evidence and a whole lot more paranoid leftist fervor, the notion that ‘chronic Lyme disease’ is a condition that the medical establishment is locked in a conspiracy to deny the existence of."

But "Under Our Skin" filmmakers assert that they’re exposing "one of the most controversial and fastest growing epidemics of our time," adding, "Each year thousands go undiagnosed or misdiagnosed, often told that their symptoms are ‘all in their head.’ " The docu scrutinizes the medical struggles of several people who believe they suffer from an extreme form of the disease and "Under Our Skin" shows how they had to battle the medical establishment to get treatment.

So why is Alexander giving a rare interview to crusade for the film?

"This movie is controversial because there’s still been a lack of diagnosis of Lyme Disease, the tests are often faulty and the medical community still refuses to treat it in the aggressive manner it needs," she tells Gold Derby in our podcast chat. "I think it’s shocking. I’ve been involved with Lyme Disease — I’ve have it twice — since the early 1970s when it wasn’t even called Lyme Disease. Since then I’ve known so many people — at least 50% of my own family members have had Lyme Disease, if not once, twice. And I’ve had friends suffer severely with it."